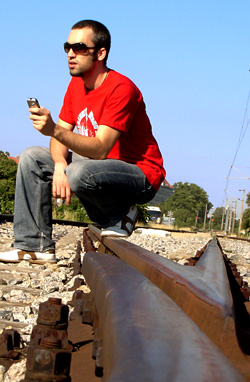 This page features an overview of the latest news concerning RealReplay, Mopius and location based gaming.

March 19th, 2007 - RealReplay has been chosen as the only winner of the official Nokia Nseries Developers Competition. Through its innovative and seamless use of the integrated GPS receiver of the latest mobile phones like the Nokia N95, RealReplay is the ideal game to try the countless new possibilities.

November 5th, 2006 - RealReplay is now available! You can download the first Release Candidate from the download-section of this site. This version is intended for public testing, RealReplay has not yet been officially released. Should you encounter any bugs or have other suggestions, please contact us!

September 20th, 2006 - Great news from yesterday's gala of the Austrian State Price for Multimedia and e-business - the jury chose our upcoming product RealReplay as the winner of its category! While the jury criticised a lack of innovation in other categories, after a hands on test they found it in RealReplay - from the official statement: "The jury was convinced by the idea as well as the realization, which is very simple to use."

June 18th, 2006 - If you think the idea of RealReplay has potential and would like to try it out as soon as possible, please vote for the application at the JavaMasters 2006 and win a mobile phone or other prizes! We're currently planning to release the game shortly after this competition is over. UPDATE: The voting-phase is over, RealReplay was one of the finalists of the JavaMasters-competition!

May 13th, 2006 - In the last few months, RealReplay has been significantly improved with several exciting new features. For example it does now support internal localisation methods of modern mobile phones as well (like the BenQ-Siemens SXG 75). The official release of the game will follow soon.

December 1st, 2005 - The goal of the Genius-Award is to find and support creative, novel ideas. This year, the jury had to rate about 80 projects. Due to the huge potential of time-shifted location based racing as used in RealReplay, our mobile entertainment application was chosen as one of the 12 winning projects!

Winner at the Forum for Mobile Communication

November 18th, 2005 - The mobile project RealReplay is one of several interesting multimedia applications that were developed for the World Sailing Games 2006. The whole concept of providing useful and entertaining information for a very large event, as well as the innovative applications themselves, convinced the jury of this year's Forum for Mobile Communication. With a huge lead over the other projects, our applications were selected as the winner of the contest!

October 31st, 2005 - 411 entries from 33 countries were sent in to this year's Europrix-Award - and RealReplay was selected as one of the 22 nominated projects! You will be able to experience the game and the fascinating new possibilites it offers at the Europrix Top Talent-Festival in Vienna, March 2006.

August 21st, 2005 - RealReplay is a game that is meant to be played worldwide. To make this possible, the whole website is now available in German. Of course, the game itself will also support both English and German!

August 5th, 2005 - The first milestone of RealReplay, Alpha 1, has been reaced. This means that the game is already fully working and supports all main features. For more information, please contact us!

July 23rd, 2005 - The official website of RealReplay is live! The game itself is not yet available, but it is making good progress. All main features and several special tricks are in - now it's all about testing and polising the whole game. Check back regularly to stay informed about the latest developments!